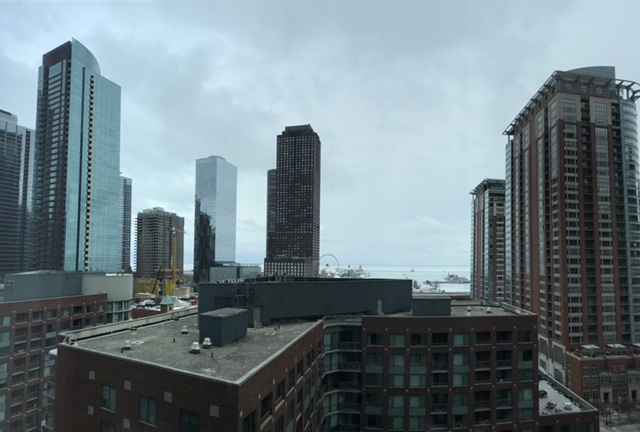 I awoke from an easy slumber when I heard the pilot come over the intercom and announce the possibility of snow upon touchdown. My second time witnessing snow this season, and fitting it being back in Chicago. I wanted it to hold off at least until we landed.

There’s something about seeing the city glow from the sky. Even at midday, the sparkle from the buildings bounced off the dull gray sky and filled my stomach with butterflies. This city. This feeling. I couldn’t say I’ve gotten used to it over the past few months. I didn’t know if it was possible to get used to it, for it still didn’t seem real. October and November felt like a faint dream come the off-season back in Jersey. But landing back in our city, in our sweet home Chicago, it felt real and just as magical as the day that it happened. The Chicago Cubs became the World Series Champions.

It was frenzy the second we landed. Fans patiently waited in anticipation at the arrival or sighting of a player at the end of the escalators in baggage claim. They were still just as excited as that day that it happened.

The Cubs Convention officially kicked off that night. As I met up with my fellow wives over drinks and off-season stories, I couldn’t help but feel back home with my family. After all, we’ve shared so many crazy, hectic moments over the past season—some only we would understand.

But the real awestruck moment came when we entered the ballroom at the Sheraton Grand Chicago in the midst of thousands of screaming, jumping fans. With the announcement of past and present players, highlight videos of the season and, of course, the delivering of the World Series trophy, I felt overwhelmed with pride, and realized that Matt and I would forever be connected with Cubs fans over this monumental achievement.

It meant so much to people. Hearing stories about families who have bonded over Cubs games is what struck a chord with me. It was personal to them. It touched their lives. It was so much more than just a ball game, than just a sport. It brought families together. It brought friends closer. And that was the real power of it.

The convention ended in a blink of an eye, and we landed in a foggy haze somewhere in Washington D.C. We geared up to meet the President. What? Did I hear myself correctly?

But I did. Our Cubs family shuffled in five buses and made our way to the White House. We went through lines and lines of heavy security. We toured rooms where history was made. We saw artifacts held by our famous leaders. We had lunch in the grand dining room. We saw the President’s dogs. And then we finally met the man, himself, and the First Lady.

As I write this now, I sit on our bed back in our apartment in Jersey. Yesterday feels like a distant reality. Meeting the President, and more, the President addressing the whole team yesterday in a ceremony fit for kings, feels like a dream. A dream where I touch down in Chicago with my husband, and we float down the glittering streets in a parade of cheering, crying, crowds holding baseballs and trophies. And I feel so honored. And blessed. And I don’t want to wake up.

2 thoughts on “The Tour of Champions”