He can hear the wailing of the horn again, but he can’t seem to tell if he’s awake or asleep, stuck somewhere between his dreams and reality. The constant blaring in the distance finally startles him awake. He rubs his bloodshot eyes and lifts his head from his crossed arms where it rested moments before in a swift, sweet slumber. In one outstretched motion, he releases his arms and raises them above his head, bringing them together, looking around and assessing the scene before him.

Crumbled scripts full of ink blots and scribbles lay scattered across the desk where he sits. Voices whisper in a dull murmur from the TV show playing on in his computer against the blackness around him. He drags his mouse to the bottom of the screen and pauses the show. Forty-five minutes have gone by, but time seems to stand still. At least out here, it does.

The dark, stiffness of the night surrounds him in the booth where he waits, the only light illuminating dully from a small lamp on the desk. He rubs his hands together and blows into them. Winter in Cape May has officially started, and so far it’s been a rough one, especially during the graveyard shift he’s taken on for some extra cash. He kneels down next to the tiny heater he brought in his bag and holds his hands in front of it. Then he hears it again, this time closer. And closer.

He is the gatekeeper. He sits in a booth on top of the bridge and waits until he hears that wailing echo he’s grown fond to love. It reminds him he has purpose. He has control. He opens the jaw bridge to let each passing boat go through. Sometimes he wonders to where the people aboard are heading or from where they came. Somewhere better than here, maybe. Although anywhere is better than here, in a tiny beach town where nothing ever happens and dreams go unfulfilled. But most of the time he wonders if he would be one of those unfulfilled dreamers.

His mom’s words still ring constantly in the back of his head. He’s played them so many times, over and over like a broken record, that he has them memorized by heart even if the record stops.

Tears swell in his eyes whenever he recalls the way she said it, so full of love—a love only a mother could feel and understand. She watched for years as he struggled with something inside him—the freedom he so craved and desired, the longing to spread his wings and be someone other than who he pretended to be all his life—the chance to succeed and chase his dreams unhinging on what others thought of him. Home would always be here, and he knows that. But it’s not like he hasn’t tried before.

New York City has already captivated and claimed him, something his friends and family can never understand. The truth is, nobody does unless one is curiously searching for the answer to a question he doesn’t even know he’s asked yet.

“For New York City, in all its fine mess of concrete skyscrapers and smoldering ferociousness, is a golden, majestic beacon, drawing in the wanderers from every walk of life,” he says to himself as he writes his words in shaky cursive on the back of one if his scripts. “And if you’re lucky enough, sometimes the city takes you in as its own. Sometimes it gives you a home, awakens you from within in ways you never thought possible and gives you the life you so desperately dreamt to become your reality.”

But as he quickly comes to realize, sometimes the city is crushing. It’s relentless in its approach. It makes him work for what he wants, testing his limits and pushing his boundaries, squeezing him from the inside out and beating him down until he finally reaches the breaking point he swore he’d never reach or he didn’t even know he had. But whether or not he can rise from the ashes is what really sets him apart from being a true New Yorker or from being from anywhere else in the world.

The problem with a broken record is that it goes on and on, playing the same song. Sometimes when he isn’t so lucky with choosing the song in his head, he hears the comments others have said to him throughout his life when he tells them of his plans of becoming an actor:

“Why would you want to live like that, Darrin?”

“Is it really worth it that much to you?”

“I will never understand.”

“Just grow up already and get a real job.”

“Well, I hope that works out for you.”

His thoughts dissolve along with the boat as he watches it turn into yet another silent figure in the night passing by his bridge. he picks up his script and speaks the words aloud, line by line, until he pauses and flips the paper over to the back where he spots his writing. His first acting gig at home, though small, would have to do while he was back for the winter months saving money and preparing. This time wouldn’t be like last time, he repeats over and over. This time is for good.

The gatekeeper of the bridge, like all of his gliding ships, set sail one night from a small beach town in Cape May County, New Jersey. Of course he comes back from time to time, as they all do. It must be something in the salt water, or the solace of the night sky or perhaps a treasure buried in the sand in the soul of one who grows up by the ocean’s edge.

He goes by the name of Darrin Hickok when he’s not pretending to be someone else in his acting gigs, and he happens not only to be a good friend of ours, but also a local hometown boy and Matt’s first and former professional trainer.

Matt first reconnected with Darrin when he was living with me during the baseball off-season up in New York City while I was completing graduate school. In need of a trainer, Matt reached out to Darrin, having heard from a friend back home he was living up in the city, and the two have been inseparable ever since—both sharing an undying passion to follow and conquer their dreams and bonding them for good. Or in Darrin’s words,

“Two guys against all odds, fighting for a vision they both have. Both different, but both equally as important.”

When they first starting training together, Darrin had a job as a personal trainer at the Equinox gym, training celebrities and other important people. He agreed to take Matt on as a client. Although we didn’t know it at the time, Darrin was living out of his car in Long Branch, New Jersey, having moved to the city in haste after being hired and not having time to lock down an apartment that didn’t break his bank (which in New York is HARD). Every day, Darrin commuted by train into Manhattan. He worked, showered and ate at the gym before taking the train back to his car, where he parked it outside in front of a friends house where he knew it was a safe neighborhood. Eventually He split his nights between a hostel and a friend’s couch in the Bronx.

“Finally the time came for me to decide,” he says. “Either I had to get my own apartment in the Bronx, or retreat home like a coward. That would be the day I found myself crying on the subway tracks on 231st street. Imagine a grown man crying on the subway tracks. I’d reached my limit. I was tired, scared and had no real direction. But then I heard my mom’s words in my head telling me that it was a year out of my life, and that home would always be here. I made her a deal. I told her if I signed the lease papers, she had to quit smoking.  I signed them, and she quit.”

The reason I write about Darrin’s struggle is because it’s true. It’s real and raw and cold—the kind of cold that slams a harsh door in your face like the world has rejected you, and you don’t know if you’ll ever recover or be the same person you were before it happened. Like most dreamers, Darrin struggled. He crashed, he burned. He was beaten. He found himself alone walking through the Bronx at four in the morning. But he didn’t let his fear or his struggle swallow him whole. He simply, or not so simply, overcame it.

Darrin now lives full-time in New York City. He has worked with acting coaches including the well-known Anthony Abeson (Jennifer Aniston’s former acting coach) and the world renown William Esper. He is currently enrolled in the Upright Citizens Bregade Theatre. He has appeared on two television shows, in addition to shooting TV pilots, indie films and short films, and he continues to work in theatre.

Darrin now has success, but he is not bitter towards the road he took in gaining it.

“After going through all this, having some TV air time, having an agent and manager and having a place in Manhattan now, I can say the hard work really did pay off,” he says. “I am now living my dream every day. But in all honesty, as happy as I am now is as happy as I would be if I were to star next to Brad Pitt tomorrow. I am now enjoying the ride, appreciating my journey. I’m living in the moment. And I wouldn’t change a thing.”

To Darrin, this blog is for you. Thank you for allowing me to share and spread your story. I hope it catches like wildfire, because, like your soul, it is hopeful and deserving of everything good in the world. You are a true example of not just a dreamer, but a doer. You did it. You continue to do it. So thank you for inspiring me. Thank you for inspiring Matt and pushing him just as you push yourself.

And to everyone out there who has followed this until now, I hope you can see that no matter who you are, no matter where you come from, no matter what you have or what you don’t, you can be whatever, or whoever, you want to be. Don’t let anyone tell you differently. And remember—

“Only he who can see the invisible can do the impossible.” – Frank L. Gaines

For more information on Darrin Hickok or to view his portfolio, please click here:

You’re Still Worth It

August 3, 2016 Admin
We watched the fireworks outside from our balcony last night. They lit up the night sky in bursts of neon colors. We sat in comfortable silence,... 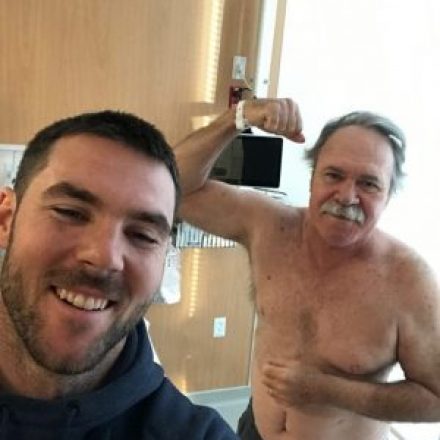 January 10, 2018 NatalieSzczur
I knew something was wrong when he emerged from the other end of the concourse, not smiling. I waited for him outside the door of the family room...