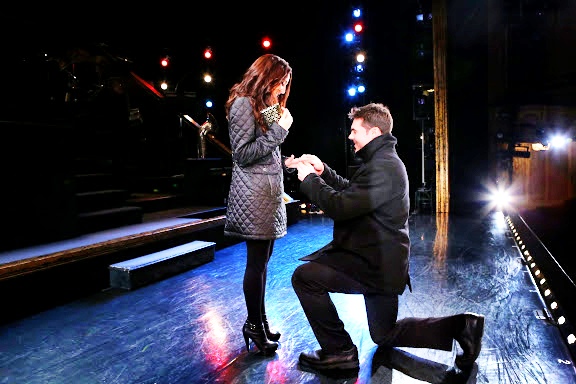 One year ago today, the streets of New York City glimmered with magic. Hints of the passing rain fall painted the streets in a shimmering golden layer as dusk quickly approached and the sun began to sink in between the skyscrapers of Times Square.

We walked hand-in-hand down the bustling streets of the city that made us feel so alive over the past year. New York City was finally starting to feel like home. I splashed through the golden puddles as we came to a stop on the corner of 47th and Broadway, waiting for the light to change.

Swarms of people surrounded us, waiting with us. Cabs flew down the streets within the blink of an eye. Everywhere, people were walking, talking, laughing, yelling. Vendors were selling street-corner items. The flashing marquees of Times Square buildings lit up the night in paintings of swirling colors of advertisements. Soft music filled the air. My heart leaped with excitement, and I squeezed Matt’s hand a little tighter as we finally crossed the street and disappeared into the crowd.

“We’re going all out tonight,” he told me. “One last night out on the town to make up for all the time we won’t be seeing each other in the next few months. And here we are.”

We arrived at the Ambassador Theatre 15 minutes ahead of time after an early dinner at Wolfgang’s Steakhouse. I turned the corner to discover he led me to a Broadway Theatre cozied by an awning overhead reading Chicago.

My eyes wandered over to the awning again, slowly scanning the words capitalized in white bold.

“Fitting,” I said. “Because hopefully one day soon you will be playing in Chicago.”

“Fitting because I heard this was one of your mom mom’s favorite shows. Let’s go.”

My heart slumped a little in my chest. How I wished she could be here with me. She loved New York. She loved Broadway. She loved music. And she passed those loves down to me. I missed her so much, but I knew she wouldn’t miss this opportunity for the world and was looking down on us, smiling.

I broke free from his grasp and hurriedly walked up the front staircase to the theatre.

He walked over to the side of the theatre and began pushing back a huge metal barricade.

“What the hell are you doing?”

He took out his phone and made a call, and within seconds the gate slowly opened.

“Matt, what the hell is going on?”

“Well, the surprise is kind of ruined now, but I set up a backstage tour.”

“I knew how much you’re obsessed with Broadway and how much it means to your family, and I figured you’d love it.”

The lights from center stage consumed me like a warm blanket, enveloping me completely, leaving nothing behind except my small black shadow.

“Go out and walk around out there,” the stage manager’s words hummed over and over again in my ears.

But I couldn’t recall her actually saying them then. For in that moment, surrounded by the heat of blinding white lights, I was no longer in my body, but looking down, watching myself experience this awestruck, surreal situation. Never again would I be able to stand center stage on a real Broadway Theatre stage, surrounded by musicians and cast members and lights in my life.

And in that moment, as I turned around to face the blackness of the empty crowd, out of the shadows, there he stood. Slowly walking towards me, he reached out and grabbed my hands, softly enclosing them in his own. As I took a step closer to him, his face appeared out of the darkness, his crystal blue eyes glaring deep down into my soul.

I watched in awe as he told me he loved me, got down on one knee and asked me to spend the rest of my life with him.

And to think this year, that day will finally come.

8 thoughts on “The One-Year Engagement”