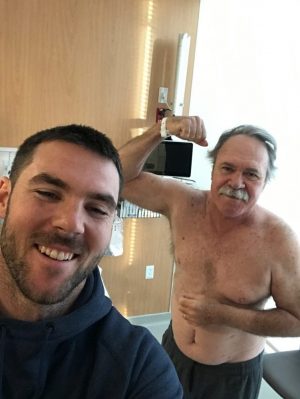 I knew something was wrong when he emerged from the other end of the concourse, not smiling. I waited for him outside the door of the family room because he promised he’d be quick showering today, and I wanted to make it home in time to freshen up before we were out the door again. He made his way to me, giving me a swift kiss on my cheek and grabbing my hand, walking me hastily through the parking garage, past the Padres personnel with whom he’d normally stop and chat, to our car. Matt studied the area to make sure we were alone.

The sunlight peaked behind the buildings and landed softly on our backs. The breeze brushed gently through my hair. It was a beautiful August day, with the game lasting only a few hours into the afternoon and ending with a Padres bowling event downtown. But I looked at the expression on Matt’s face as he tried to hold back tears, and I knew we would not be in attendance.

I immediately went to baseball—was he being traded? Released? It wasn’t the worst thing in the world. I started formulating a plan in my head—we could deal with this. But something like that wouldn’t bug Matt. He’d never cry over it. It was something bigger.

I waited in silent anticipation as he turned his back to me and leaned his arm against the cement wall of the open garage where we stood. I slowly went to him, put my arms around his waist and asked him softly, “What’s wrong?”

He took his time answering, slowly turned around and said, “My dad had a stroke.”

The next few hours were a blur. We got back to our apartment and started making phone calls to the family. Where was he? What happened? Was he okay? What caused it? The questions swirled in our heads and in the pit of our stomachs. The takeout containers of food Matt brought home from the field sat untouched on our coffee table.

Pacing, I went to the window at the sound of voices from outside. The event was starting across the street, and I could see from our apartment lines of people dressed in Padres gear forming at the doors. It was to be a fun night with the team and fans, an open bar, and some good old-fashioned bowling competitions. I turned back to Matt.

Our world as we knew it was now acting in slow motion, but everything happened so quickly. The Padres travel secretary booked us on a redeye flight to Philadelphia that night—the soonest available flight out of San Diego. We left the airport at 10:40 PM and landed in Philly at 7 AM.  Matt and I went straight to the hospital. We hadn’t slept, hadn’t showered and hadn’t had time to think about it until we saw his dad with our own eyes to make sure he was okay.

The next few days were spent in an ICU room at Cooper Hospital, sleeping on chairs, reading books, watching TV, and returning to the lobby for sandwiches and water from the cafeteria. His dad had a stroke, but that was all we knew. The cause was still unknown. The doctors tested and scanned his entire body over the next two weeks, while his dad laid aimlessly in bed trying to gain movement back into his left arm. His two-week hospital stay ended with a blood thinner and physical therapy, with still no real cause for the stroke.

Last October was a hectic time for us. We were still deep into baseball season with the Chicago Cubs on the road to the World Series. Our off-season didn’t start until the end of November. This year, the San Diego Padres were finished their season on October 2nd in San Francisco, and Matt was flying back to the east coast after the game that night.

While Matt was still on the road, the nightmare back home continued. His mom called me and told me his dad had stomach cramps too painful for him to bare, and she was taking him to the hospital as a precaution. The precaution turned into a transport back to Cooper Hospital. He was ordered to have a mandatory colonoscopy for the following day, where they found a spot on his large intestine needing to be removed.

The three of us sat in the O.R. waiting room for five hours. They said surgery would take 2-to-3 hours, and we started worrying by the fourth, but we kept up our spirits and occupied our time by watching the NBA playoffs, chalking the extra time to the doctors being thorough.

Another hour later, I watched families one-by-one trickle out of the waiting room after being summoned by their doctors. I wondered where ours was. We were the only family left in the room. My father-in-law’s surgeon finally came walking through the double doors 15 minutes later, looking worn and tired, his face flushed as he took off his gloves. He hadn’t bothered to remove his scrubs or hair net, and his face was sad and solemn.

He broke the news slowly and gently, explaining how they went in to remove the initial spot, but found three more spots in the process on his liver. He explained how he took parts of the spots out to biopsy them. He mentioned the word cancer.

The moment took me back to years ago, when my brother was first diagnosed. The years of pain, of anguish, constant worry, the grasping for life and hope and prayers. It was all resurfacing, happening again, struck for the second time in my life with a loved one having cancer. Stage four, the doctor said. I started panicking. I sat back deeper into my chair and let my tears stream. The pain never really went away—it is but a scar fresh for reopening any time. The time had finally come, as the horrific disease was coming back to try to take someone else I loved.

We didn’t have much time to decide, but we transferred his dad to another hospital based on recommendations from family, friends and local community members who had received treatment, or who knew someone who had, from the University of Pennsylvania. We went into his initial appointment hopeful, but our news was yet again crushing.

His new doctor told us the same thing—stage four colon cancer. She recommended chemotherapy to start. She told us she didn’t know if it would work. She was brutally honest, not wanting to give us false hope. A 60 percent chance was what he had. The cancer, she explained, was smart enough to plant four separate spots on four different parts of his liver. It was advanced, and she recommended surgery only as a last resort.

Matt, his parents and I left that day feeling defeated. The storm was not subsiding, but only brewing for the eye to be more powerful. We drove the two hours home in silence. After a while, Matt turned on the radio. I placed my head against the side door. I looked out the window and shut my eyes, trying to escape the suffocating reality for a brief moment.

The bay was frozen over last Wednesday morning. Matt and I walked slowly along the pathway from our apartment to the end of the island, scanning the surface for any birds toughing out the snow expected to lay tomorrow. After a few blocks, we found a bench and sat, sipping our coffees in the quiet air. It was crisp and cold when I breathed in deeply, spotting something large sitting on top of the water.

“Yes, it is. Look,” he said, taking another sip of his coffee.

“Probably a bird,” he said.

“Yes way. He probably carried it from the ocean.”

His phone rang in his pocket as a seagull came down and swooped up the figure in its beak, before launching back into the air and flying off.

It was his mom. She was calling from the car, on their way home from his dad’s first scan after three rounds of chemo treatment. She said they had some good news. The scan showed the spots on his liver shrinking significantly. His colon and stomach were cancer free, and early next week, after one more round of chemotherapy, they were to meet with a surgeon to discuss removing the liver spots. The treatment was working. His body was responding.

We sat on the bench a while longer after that. We hugged. We cried. We laughed. We continued watching the birds swoop down and pick crabs from the ice. Life was the same as it was a few moments ago, before the phone call and the news. Except, then it wasn’t. It was better.

It’s still a battle for Matt’s dad every day. The chemotherapy does have its side effects. The situation does bring on its stresses, both emotionally and physically, for everyone involved. Next week, he will have his meeting with the surgeon to discuss the next step of the plan. His journey is not over yet, but he is slowly overcoming it.

We’d like to thank every one of you who has texted, called, stopped by, sent gifts and cards, and prayed for Matt’s dad and our family. We are truly blessed to have so much love and support in our lives during this tough time. Please keep the prayers coming. Papa Szcz is killing it!!!!