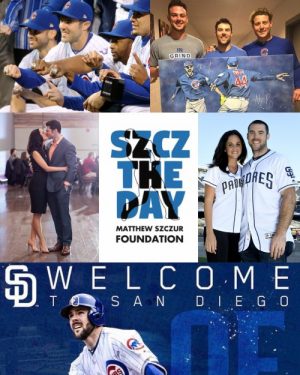 I woke up this morning the same as any other. The steam from the shower slipped slowly beneath the bathroom door in a warm cloud over the bed, where I still lay in a light slumber. I opened my eyes in a foggy haze and glanced over at the clock on the nightstand. It was 6:57 AM, and I knew by this point Matt had already fed our fish, eaten breakfast, and was now getting ready for the day. Four-thirty came early most off-season days, and Matt had trained his body to wake up without an alarm. Normally, I was able to fall back asleep for a few more hours. But today was New Year’s Eve, and I was looking forward to the night’s festivities.

I decided to linger in bed a little longer and scroll through my Instagram feed in reminiscence of the year 2017. I started with the first picture I posted—Matt and I standing in the middle of a crowded bar last New Year’s Eve, wearing party hats, me tightly embraced in his arms and he sporting a new, neatly tailored suit from Chicago. The caption read “Bring on 2017.”

We were coming off the most magical year of our lives. Being a part of such a special time in Chicago history, surrounded by teammates-turned-family, our family and friends, millions of people who turned out on the streets of the city to greet us with cheers and tears, we felt like we were living in a dream—a World Series bubble filled with love and celebration and comfort. It was unbreakable. What could have possibly popped it?

2017 upheld its end of the bargain. It was another year of being blessed, truly, but the year definitely “brought it on” and had its fair share of ups and downs. I continued scrolling up on my feed, stopping and quietly remembering the points in our lives where each picture was taken, each one representing different winding paths outstretched before us—paths we never expected to take.

It wasn’t an easy year, both professionally and personally. It was a year of uncertainty, a year of unpredictability and most importantly, a year of growth, both individually, as a couple and as a family.

We struggled at the beginning of some paths, one big one being the trade landing Matt with a new team for the first time in his career on the opposite side of the country. The San Diego Padres. A new team, new teammates, new state, new city, new way of doing things. That was a big hurdle for us, but we knew the nature of the game and that it would come one day. We packed up our apartment in Chicago with less than 24 hours-notice and transplanted our lives in San Diego, looking at the move as a positive adventure and new chapter in our lives. The trade turned out to be just that, but I’d be lying if I said it was easy for us.

The year also was a difficult one for our families, being plagued by separation and sickness. It was never easy being so far away when your families struggled back home. Not being so easily accessible, while still trying to help and be there for emotional support was debilitating, a continuing hardship to endure for us in the new year ahead, but not one of uncertainty anymore.

But there were also happy times—pictures of us with family when we had the opportunity to come home, Matt’s artwork flourishing, new friendships forming, new landscapes being explored. I looked back on those pictures and remembered how we felt at the time. I looked at our smiles and couldn’t help but think we were still two kids from a small town in Jersey trying to find our ways in the world. We didn’t have it all figured out, realizing we never would, but also realizing it was okay where we were.

Because that was all life was. Trying. Living in the moment. Making the most of opportunities. Rolling with the hardships like the waves of the ocean we grew up looking out upon. Striving with the highs. Appreciating the little things. Loving and giving whole-heartedly. Being knocked down by the pain, but making the decision to rise above it and use the struggle for good.

I stumbled out of bed and walked out to the kitchen, where my egg sandwich was waiting for me under a pan lid, steam blanketing the glass in an uninterrupted layer. I poured myself a cup of piping hot Wawa Holiday Blend coffee, wrapped myself in a blanket and watched the remainder of Harry Potter and the Goblet of Fire on TV. Footsteps emerged from the bedroom, and I felt a warm embrace from behind me. My husband stepped out from the steam and kissed me good morning.